He felt all the time fatigued !!

Clinical scenario:
A 54 yr old male was admitted with history of fatigue and generalized malaise of 3 weeks duration . He also complained of postprandial fullness and an episode of non bilious vomiting .Patient denied history of fever , night sweats but had weight loss of 3 kgms over this period.
Prior to this presentation he was admitted in a different hospital one month ago with history of epigastric pain of 3 days duration and was managed as acute pancreatitis based on high levels of Amylase and lipase and an ultrasound evidence of gall stones at that time .After necessary treatment his pain had settled and was discharged home with an advice for follow up. Patient has been known case of Diabetes mellitus for last 5 years on oral hypoglycemic agents.
Clinical Examination:
On examination, he was conscious, oriented in time place and person with stable vitals . There was no icterus , pallor or lymphadenopathy Systemic examination was normal.
Investigations :
The blood tests revealed Hemoglobin of 11gm/dl WBC 9500 normal platelets . Bilirubin levels of 2.3mg .ALP 230 KA units ALT/AST 65/57. Kidney functions and electrolytes were normal . Serum Amylase and Lipase were normal too. HIV serology was negative .
Hospital course:
Patient underwent Upper GI examination which revealed thick whitish patches in esophagus suggestive of candidiasis and brush biopsy later confirmed . The stomach showed diffuse thickening of stomach folds and multiple biopsies were taken . D1 was normal and D2 showed diffuse thickening extended to Peri-ampullary area Explaining his episode of pancreatitis few weeks prior to current presentation 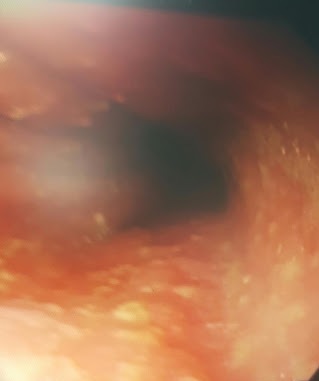 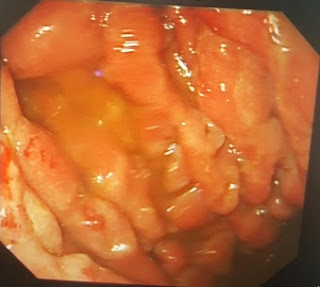 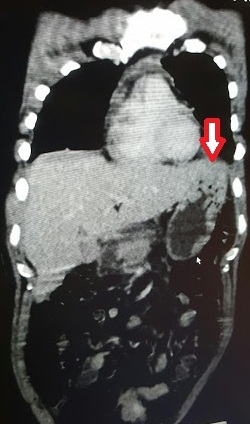 Fig 3 CT scan stomach showing diffuse thickening near antrum and body of the stomach.
The biopsy from stomach showed Aggressive Non Hodgkin B cell Lymphoma consistent with Burkitt's Lymphoma . Immunostains CD20++ ,CD79a++, CD 43+Ki-67++ Bcl-2 AlK1-+. Quick stain for H pylori was negative.
The bone marrow biopsy was done to stage the disease .It showed hypercellularity due to infiltration of lymphocytes blue cytoplasm and vacculations (stary sky appearance ) around 35% Reduced erthrpoises . The biopsy was consistent with stage 4 Lymphoma
The patient was planned for chemotherpay

Fig 4 Microscopy showing features of NHL
Burkitt lymphoma is a substantially aggressive mature B cell neoplasm mainly in children and young adults. This entity has three recognized clinical variants: endemic form which is usually associated with EBV infection, sporadic variant where only about 30% of the cases are related to EBV infection, and immunodeficiency associated BL . Extra nodal disease is frequently observed but GI tract involvement varies among the three clinical subtypes, with the sporadic variant usually presenting as an abdominal mass, commonly in the terminal ileum . Rare cases of gastric as the index case and cecal BL have also been described.
Â